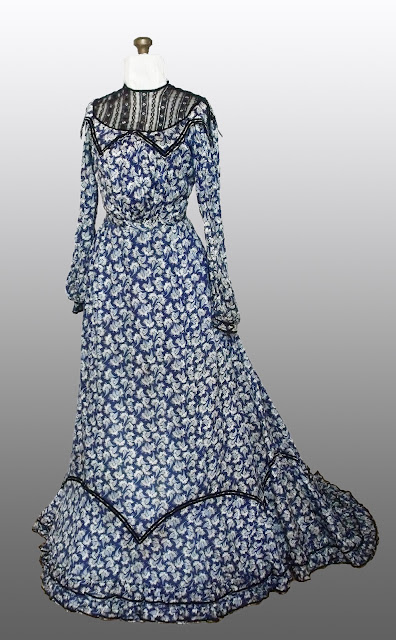 So it turns out I'm not the only one with happy memories of going through boxes and bags from Nanny's closet and discovering old clothes with Grammy Rivers. My cousin Tina, who found Nanny's portrait dress after we dismantled the closet, has fond memories of the happiness she and Grammy shared when they realized what it was. Apparently it was in an old bag, and since Grammy was mostly blind, she had thought it was a set of crusty old curtains. More recently, Tina's discovery skills struck again as she and my mother stumbled on this blue ensemble when they were helping clean out Grammy's house. This dress is from about the same time period as the portrait, c. 1900-1908. I'd never seen this one before though, despite all of my explorations, which is a testament to the unknown depths of the things stashed away at Grammy's house. Sadly, some mice found this dress before we did. They had nibbled on the hem and a cuff and are probably responsible for some staining on the skirt. The rest is in excellent shape though, and as is often the case with dresses from Grammy's, we have extra fabric if we want to repair it. The extra material suggests that this is either a "Nanny original," or it was made by Nanny's mother.


The ensemble has two pieces, a skirt and separate bodice with an unlined black lace neckline. I think it also would have been worn with some kind of waist-cinching belt and a separate high collar.The fabric is either silk or highly-polished cotton with black velvet trim. The skirt is slightly trained with a double row of ruffles at the hem. A linen lining with central hooks and eyes is sewn into the bodice.

The sleeves have a series of pin tucks that stop above the wrist to create a flare before they end in tight cuffs. This is the kind of detail that seems to be characteristic of Nanny's sewing, especially for the dresses she made in the 1920s and 1930s. She never seemed to skimp on the detailed stitching, even though she preferred busy prints that obscured all that hard work. I try to take pictures of these details, which is why I have so many shots of this dress. The photos don't show off all of that detail though, especially if you get the whole front and back in the image as shown below, so it's even more striking in person. Many thanks to Tina and my mom for rescuing this so that we can all enjoy it as a gorgeous example of our ancestor's taste and sewing skills. 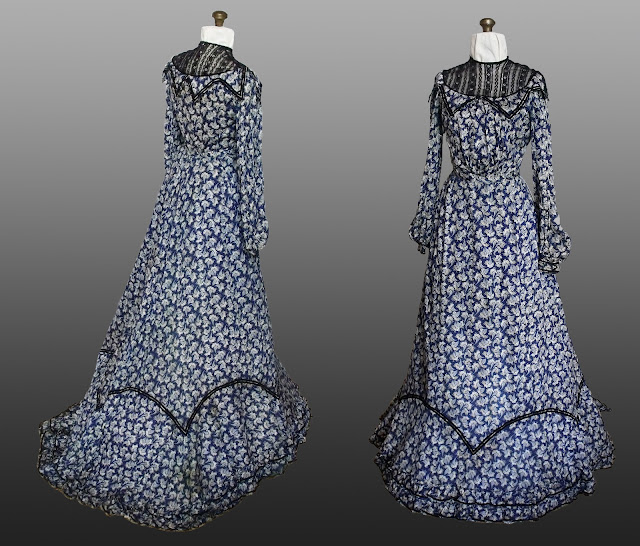 Sara
Maryland, United States
A curator at work, a collector at home.